We keep hearing and reading about the comeback of “Analog” audio gear nowadays. Vinyl records, crazy high prices for vintage stereo, musical, and recording gear. That fat warm sound… So just what is an analog synthesizer you ask?
Let us get a quick overview starting with… 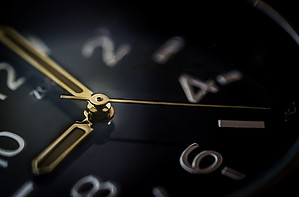 “Analog” as an adjective is defined in most dictionaries as: “relating to, or being a device or system in which information is represented by continuously varying physical quantities”.

An analog electrical signal is one that is continuously varying in amplitude over time without being quantized or otherwise broken up.

Analog as it pertains to electronics, and in particular the electronics used audio signal generation, processing or amplification, etc., is sound that is not generated or processed in any way by digital technology – even though a “square wave” from an analog oscillator is very digital by nature 🙂

Sort of like comparing a photograph taken directly on film vs a digital photo that is made up millions of pixels. The digital photo has a certain “resolution” where the analog film photo has no set resolution other than the physical limits of the film itself.

Same is true with digital versus analog audio. Digital audio has a resolution based on the rate at which it sampled. Analog audio is continuously variable, but within the physical limits of the circuitry processing it. It has “continuously varying physical quantities” of the photo-sensitive chemicals that produced the photo.

It is often the physical limits of the several designs of analog circuitry that give analog sound that sought after “warmth”. 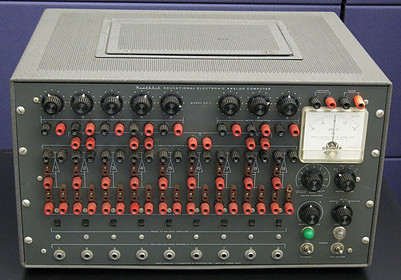 In The Beginning: The Analog Computer

In the earliest days of computing, we had analog computers. These were large mechanical, electric or electronic machines. Calculations were performed in real time by patching together various separate analog building blocks or modules that performed a function. These were built with precision electronic components and performed functions such as addition, subtraction, inversion, integration over time, multiplication and exponentiation. These are connected together to create the “formula” used to generate a final result.

The computer operator can dial in constants and variables using knobs or switches or a voltage from an external source. The output results would then be read from meters or other indicators on the computer console. This is much like the way you dial up or down the amount of volume, bass or treble (the output) you wanted from your stereo system.

These dials would be used set a certain DC voltage (a constant) or to control an amount of output going from one module to another.

Analog computers were widely used for complex calculations during World War II. One of the earliest examples is the mechanical Antikythera mechanism dating back to about 150 B.C. 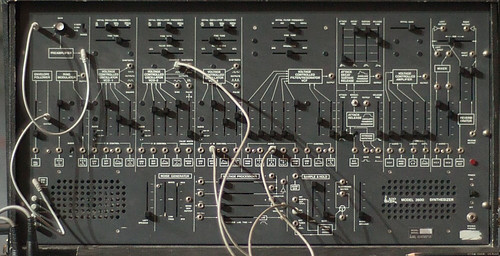 Analog synthesizers have their roots as analog computers. Building upon the idea of patching or switching together a “formula” and twiddling dials to produce an outcome. Analog synthesizer “modules” use circuitry that generates sound signals and other modules to modify it into something musically useful.

You patch together the desired sound – the formula. You twiddle dials to change pitch, volume, the tone color, mix signals, and apply other effects to make music!

The keyboard of the synthesizer is much like a special “dial” in that it is used to pick off a certain point like you set with a dial. This one usually used to control pitch.
The keyboard will also trigger events when a key pressed or released.

You’re playing a keyboard (dialing the pitch) and twiddling knobs to control other qualities of the sound. The Minimoog synthesizer below is a well known example. Earlier examples of electronic music synthesizers date back to the 1920s. 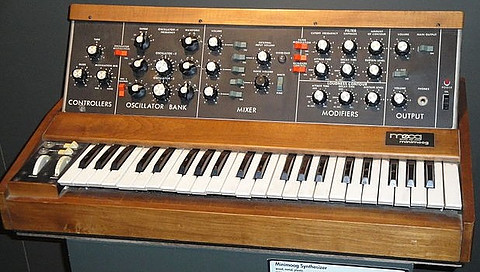 How They Make Sound

The most crucial building block of an analog synthesizer is a sound source – an oscillator. This is an electronic circuit that generates an audio tone or some form of noise. In an analog synthesizer it’s pitch is controlled by playing notes on a keyboard and/or dialing a knob. It can be modulated by the input of a varying voltage.

The oscillator’s output is then routed though other modules that control the amplitude (the volume level), apply filtering to change the sound “color”, mix in other sounds and signals, etc. There are also modules that generate and respond to events (e.g: Gate and Trigger) such as when a key pressed down and when it is released. These events can trigger “envelope generator” modules. These are what turn the sound on when you press a key and turn it off when the key is releases. You can control parameters such as Attack, Decay, Sustain and Release to make the sound come on softly and fade away slowly. You can make it the quick pluck or twang of a string.

Early synthesizers were “monophonic” meaning that they could only play one note at a time. Later, “polyphonic” systems were developed that allowed the performer to play several notes at once.

Whenever you wanted to change to a different sound, you had to undo/redo patch cords, re-dial knobs and a lot of stuff. Eventually, analog synthesizers evolved to provide a way for the performer to store favorite patches in a memory bank. This was done by incorporating a dedicated internal computer to manage storage and retrieval, and an interface to the performer. You could change patches instantly in real time. This made the synthesizer practical live performances on stage.

Yes, there are patch storage management and user interface parts that are “digital” but the sound generation circuitry and audio signal path are analog. The MemoryMoog and the Sequential Circuits Prophet 5 are just a couple of many examples.

Analog is here to stay as can be seen by the renaissance of restoring and collecting vintage synthesizers. There are lots of new developments today using analog techniques.

Thanks for reading and welcome to my analog corner in the digital web world. I hope this article was of help to you and that you’ll bookmark us, stick around and enjoy this site. I am adding new stuff every week!

Your comments, questions and feedback are welcome.