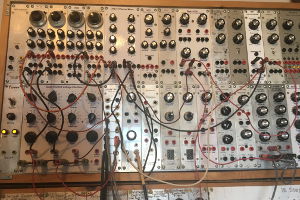 There was the humble Analog Computer. This was a console consisting of circuitry that performed addition, subtraction, multiplication, exponentiation, integration over time and more. The operator would patch these components together to create a complex formula or equation. They would then dial in constants and variables using knobs, buttons and switches and read the result on a voltage meter.

Sounds rather basic by today’s standards, but this workhorse was used to perform complex and precise calculations during World War II.

A few folks then had the bright idea of creating a specialized version of the Analog Computer for creating sound and music.

Modular electronic music synthesizers build on this concept by letting you patch components together to create a “formula” for a desired sound or effect. Like the analog computer, you can turn dials, flip switches, push buttons or keys on a musical keyboard and hear the output of the “formula” you patched in.

The signal is the raw audio being fed into this “formula” or patch to be processed. In a purely analog synthesizer, modules will be connected together to form a signal path through which the sound is processed into final form you want.

Certain modules will have one or more parameters that are controlled using control voltages. These varying voltages are what control
just about every sound parameter. From the pitch of a note you are
playing to the rise and fall in volume when a key is pressed and
released.

A gate is a voltage that turns on for a period of while an event is active. For example the keyboard controller has a gate that turns on when one or keys are pressed and stays on until the keys are released.

A trigger is a short “pulse” that is generated that can be used to re trigger events in your system while a gate is active. For example when you play different notes on the keyboard while holding another key down.

The gate and trigger are used to trigger events on modules such as envelope generators (more about those shortly) in the patch you have set up.

It all starts with a cabinet to mount the modules in. This can be a large or small enclosure depending on the size of the system you want. Inside will be a power supply to provide regulated DC power to all the modules. Your system can be just one small cabinet or it can be an entire wall of modules in several enclosures.

Inside the cabinet there will be horizontal rails running from end to end at a certain spacing depending on what module format you have chosen.

The VCO: The first and most important module in a system is the Voltage  Controlled Oscillator or VCO. These take in a voltage and produce a tone or pitch based on the input voltage.

Most VCOs are based on a one volt per octave standard or 1V/Oct for short. A one volt increase in the voltage sent to the VCO’s control voltage input increases the pitch by one full octave, doubling the frequency. 1/12th of a volt would change the pitch by one semitone on the chromatic scale.

A VCO will usually have several “wave forms” available at its outputs. The shapes can be “sawtooth”, “triangle”, “square” or a variable width “pulse”, or “sine”. This is the raw tone that you will process through other parts of your system. This the start of the signal path.

Noise source: It’s just that – noise! You’ll usually have one or two kinds of noise “white” and “pink”. Noise is a hissing sound that is useful for sound effects like wind, explosions, ocean surf or for adding a breathy hiss to a musical sound.

Next you are going to feed the signal source, let’s say a VCO into one or more signal processors to shape it into something musically useful.

The VCF – Voltage Controlled Filter. The VCF is used to filter out high frequency or low frequency parts, or pass just a narrow frequency range, of the signal being fed into it. These modes are known as “low pass”, “high pass” or “band pass”. The frequency at these take effect at is known as the center frequency or cut off frequency. This center frequency can be controlled via a control voltage and by dials on the VCF.

The VCF has the action of smoothing out the harsh “electronicy” raw sound of the VCO’s square or sawtooth outputs and making them sound more natural or musical. The VCF can also be used on a noise source to create a varying sweeping wind effect.

Most VCFs have a “resonance” control that adds a little emphasis or resonance at the filter center frequency.

These are things that generate control voltages (CV) to control parameters in your system. An obvious one would be a keyboard.

This outputs a control voltage that goes from low to high depending on what note you press on the keyboard. In addition, the keyboard also provides at least a gate. The gate as mentioned earlier tells your patch that a key has been pressed. Most keyboards also send out a trigger that is generated whenever a note changes even if no keys are released.

A keyboard might also include additional controllers such as pitch bend/modulation wheels and or a joystick. These devices provide addition control voltages that can be used to add expression to what you’re playing on the keyboard.

Envelope Generators – Or EGs for short. These modules take in a gate/trigger from for example the keyboard and generate an “envelope” that is most commonly used to control the volume of a VCA. A commonly used envelope is the ADSR envelope – It has four settings – Attack, Decay, Sustain and Release.

Attack is a time value that sets how long it takes for the envelope to rise from zero to its maximum peak. Attack begins when the gate is first applied.

Decay begins immediately after Attack has reached the peak level. Decay is the time it takes for the envelope to drop down to a point set by the Sustain control.

Release begins when the gate turns “off”. This is the amount of time it takes for the envelope to drop from the Sustain level back down to 0 volts. Release has no effect if Sustain is at 0% and the Decay time has completed.

A trigger on the EG’s trigger input will restart the Attack/Decay cycle again.

Attack, Decay and Release times are variable from instantaneous to 10 or more seconds. Sustain level is variable from 0% to 100%.

Patching it all Together

What connects all of this together? Patch cords! These are wires that have plugs on either end that fit into jacks on your synth modules. They come in various lengths from very short like 6 inches to several feet long. In any sized system, you’re going to need a good fist full of patch cords.

Patch cords route the signals, control voltages, gates/triggers to where you need them much like an old-fashioned telephone switch board operator connects your call to whom you’re calling.

I’ve barely scratched the surface of the many components that make up a minimal modular synthesizer system. In a nutshell, it is a sound painter’s palette of endless soundscapes limited only by your imagination!

Thanks for stopping and letting me share my own answer to the question of what is a modular synthesizer. I’m a very happy fellow if you’ve enjoyed reading this article and learned something new.

Feel to leave questions and comments below. We love hearing from you, newcomers and seasoned pros alike!

Ta ta for now – time to tweak some knobs…

4 thoughts on “What is a Modular Synthesizer? Let’s Dial Up Some Noise!”

Scroll back to top